NueRobotics is founded by Hadi Esper.

Hadi Esper is an entrepreneur who started his career founding a Home Automation Company based out of Dubai that grew from a small startup a well established and self sustained company that is considered by many to be one of the top companies in its niche market. 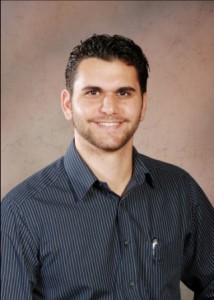 Robotics and Automation have always been a both a personal passion and a professional development.

Research in the Robotics field has been on Hadi’s journey for the past 10 years. Ranging from fields of Artificial Intelligence, to Computer Vision and Advanced Integration.

Project JoGo is a project that was a result of a culmination of many years of accumulated knowledge through working projects starting wit the very first project called “Jarvis” which was an automated voice controlled butler developed in 2006. Project Jarvis developed over the years from a simple command based home automation assistance to a software robot that uses Natural Language Processing, and can also recognize different people using advanced face recognition algorithms.

The Journey to JoGo continued with an adoption of several open source based platforms such as the Poppy Robot Project and Nao Robot. Which was used a physical platform to test human machine interfacing techniques and several robotics algorithms.

From there JoGo came into fruition as it was developed in several design drafts over a period of 12 months. Along the way, so many improvements were made on the robot’s central processing system which acts like an operating system on which other subsystems run. The goal of the JoGo project was to create a social robot that bridges the latest in robotics technology with all the human elements that can make a machine social by developing human like interaction empathy with the user.

Hadi believes that Dubai will become a hub for advanced social Robotics in the region. Through its forward looking vision, support for startups and technology and its progressive economic environments are the catalyst for such technologies to establish themselves in the region.

At the moment, NueRobotics is open to partnership opportunities that will help us achieve our vision of speaking social robotics across all areas of business and private life.